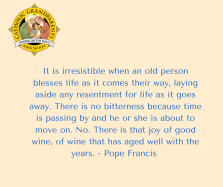 At the Wednesday General Audience, Pope Francis reflected on the value of old age, focusing on Daniel’s prophetic dream about the Ancient of Days (Dan 7:9-10).

The Pope said the vision—known as a theophany—highlights the connection between old age and youth.

Everything about the man in the vision is full of “vigour, strength, nobility, beauty, and charm”. Yet, noted the Pope, the man is described with hair as white as snow, like an old man.

“The snow-white hair is an ancient symbol of a very long time, of time immemorial, of an eternal existence,” he said.

Beauty of a white-bearded God

Pope Francis stressed that there is no need to strip our faith of symbols when trying to explain the Bible to others.

“The image of God, who watches over everything with snow-white hair, is not a silly symbol. It is a biblical image; it is noble, and even tender.”

God, added the Pope, is both ancient and new, since He is eternity.

In the same way, humanity needs to rediscover the importance of allowing the old and the young to interact and share experience and enthusiasm.

“Old age,” said the Holy Father, “must bear witness to children that they are a blessing” by embracing the “mystery of our destination in life”.

Elderly bless life as it comes and goes

The Pope said the elderly have a unique way of bearing witness in such a way that is “credible to children.”

“It is irresistible when an old person blesses life as it comes their way, laying aside any resentment for life as it goes away. The witness of the elderly unites the generations of life, the same with the dimensions of time: past, present and future.”

At the same time, said Pope Francis, it is painful and even harmful to separate the ages of life and pit the old and the young against each other as if they were competing for the same resources.

Passing on wisdom of dying

Pope Francis concluded his catechesis by encouraging parents to allow their children to interact with the elderly, even as they near death’s door, so as to pass on “the wisdom of dying”.

“The alliance between the elderly and children will save the human family,” he said.

“Death is certainly a difficult passage from life—but it is also one that concludes the time of uncertainty and throws away the clock. For the beautiful part of life, which has no more deadlines, begins precisely then.”