Catherine Wiley’s interest in Grandparents – their unique and increasingly important position in family life – dates, unsurprisingly, from the time, not long ago, when she and her husband, Stewart, became Grandparents themselves. Catherine Wiley and her husband had brought up their children in their family home in Walsingham, Norfolk, a mile from the English National Shrine of Our Lady. They had seen many pilgrimages come to visit the Shrine; diocesan, parochial, religious congregations, young people, students, schools, sick and handicapped people, national groups, and many others. It is not surprising that the idea of a Grandparents’ pilgrimage grew in Catherine’s mind. 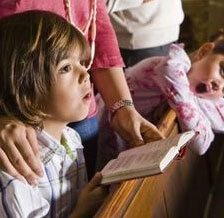 So, with the blessing of the Bishop of East Anglia and the encouragement of the Director and staff of the Shrine, Catherine Wiley organised the first National Grandparents’ Pilgrimage to the National Shrine of Our Lady in Walsingham on Saturday, July 26th, 2003, the feast of St. Joachim and St. Anne, who, as parents of Our Lady and Grandparents of Jesus, may be considered the Heavenly patrons of this whole enterprise. The pilgrimages have been repeated annually since then.

Subsequently Mr. and Mrs. Wiley bought a home in Ireland, in the archdiocese of Tuam, near the Irish National Shrine of Our Lady at Knock. This gave Catherine a new field of action to explore – a Catholic country with strong family traditions. Excellent relations were established with the then Archbishop of Tuam, Dr. Michael Neary, who wrote a message of strong support and agreed to lead and preside at the first Irish National Grandparents’ Pilgrimage at Knock Shrine in September 2007. Since then the pilgrimage has been held annually and the number of pilgrims has rapidly increased – well over 10,000 Grandparents attend each year.

Meanwhile, the enterprise begun in England and Ireland had been noted in Rome and, in 2008, Catherine Wiley was invited to attend a plenary meeting of the Pontifical Council for the Family in the Vatican (Theme: Grandparents’ Witness and Testimony in the Family). Subsequently, Pope Benedict, at the request of Catherine and her supporters, composed a special prayer for Grandparents, which Catherine presented at the Sixth World Family Congress in Mexico, organised by the Vatican in 2009.

The Association is managed by a body of trustees. The Founder of the Association, Catherine Wiley, is an ex-officio member of this body, from which are chosen also the President and Vice-President. The Association has a permanent office. It is staffed by volunteers and handles correspondence, publications, and other administrative details. It also maintains this website. The Catholic Grandparents Association is a registered Charity No: 19038.