EMAIL
info@catholicgrandparentsassociation.com
CALL US ON

Grandparents Day was created on 23 September 2013 by Philip M Chircop after obtaining, on this day, the Distinguished Patronage of HE Dr George Abela, President of Malta. The DAY is being established for the first time in Malta by Grandparents Malta, an NGO founded by Philip Chircop & Charles Stroud, with the aim to instil in our siblings respect for our forefathers and to encourage them to look up to their Grandparents not only on this day, but throughout their lives. Grandparents DAY will be celebrated this year, 2013 on Sunday 20 October, when the Church celebrates Missions Sunday, also highlighting Grandparents’ Mission in the Maltese Family Life, and will continue to be celebrated on the 3rd Sunday of October, thereafter.

National Grandparents’ Day began in Canada in 1995. Motion number 273 submitted in the house of commons by Mr. Sarkis Assadourian read: That, in the opinion of this House, the government should consider designating the second Sunday in September of each year as Grandparents’ Day in order to acknowledge their importance to the structure of the family in the nurturing, upbringing and education of children.

Grandparents’ Day is celebrated, beginning in 2010, on the second Sunday in September.

In France, Grandmothers’ Day began in 1987 and is celebrated on the first Sunday in March.

In Germany, Grandmothers’ Day was established in 2010 and is celebrated on the second Sunday in October.

In Italy, Grandparents’ Day was established in 2005 and is celebrated on October 2 Guardian Angels’ Day in the Roman Catholic Church.

Singapore started celebrating Grandparents’ Day in 1979, a year after the U.S. started.

The Ministry of Education (Republic of China) initiated Grandparents’ Day in Taiwan on 29 August 2010, on the last Sunday in August annually, shortly before schoolchildren would start a new semester.

The celebration was introduced to the UK in 1990 by the charity Age Concern. It has been celebrated on the first Sunday in October since 2008, although it is not widely advertised and hasn’t been as commercially successful as Mother’s and Father’s Day. Businesses specialising in gifts and greeting cards have started merging the respective grandparents days with Mother’s Day and Father’s Day to try to boost sales.

National Grandparents’ Day in the U.S. is the first Sunday after Labor Day, in September. It falls on September 9, 2012, then September 8, 2013.

The holiday is expected to grow in significance over the next decade and beyond as the number of grandparents in the United States rises from 65 million in 2011 to 80 million in 2020] as a result of the baby boom. Grandparents in America are also increasingly responsible for child care and support. In 2012, 30% of children under five with working mothers were cared for on a regular basis by a grandparent.

The Dicastery for Laity, Family 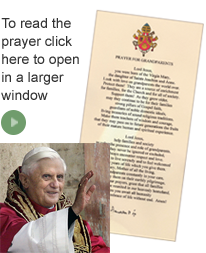