The Catholic Grandparents Association (CGA) was founded by Catherine Wiley in 2001.

Catherine’s interest in Grandparents – their unique and increasingly important position in family life – dates, unsurprisingly, from the time, when she and her husband, Stewart, became Grandparents themselves. 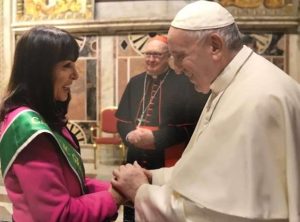 Catherine Wiley and her husband had brought up their children in their family home in Walsingham, Norfolk, a mile from the English National Shrine of Our Lady. They had seen many pilgrimages come to visit the Shrine. It is not surprising that the idea of a Grandparents’ pilgrimage grew in Catherine’s mind

As a grandmother of ten, Catherine, has made it her life’s mission to promote the unique vocation of grandparents in passing on the faith.

In 2008, in response to a request from the CGA to Pope Benedict XVI, he wrote a Prayer for Grandparents, which since its launch at the Shrine of Our Lady of Knock, has been translated into 27 languages and into braille, has become the official prayer for grandparents and the elderly. 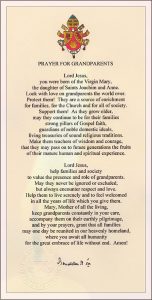 The CGA first requested a World Day of Prayer for Grandparents in 2012 as part of an address at the 50th International Eucharistic Congress in Dublin. The CGA asked that grandparents would be celebrated by the Church in the same way that young people are at World Youth Days.

On several occasions since then, the need for a Church-wide day for grandparents has been petitioned for and prayed for worldwide.

It was at the 2017 National Grandparents Pilgrimage to Knock Shrine that the formal appeal to Pope Francis was launched and blessed by Archbishop Michael Neary, Archbishop of Tuam and Patron of the CGA. The announcement on 31 January 2021 of a new Church-wide celebration for Grandparents and the elderly came in answer to our prayerful requests to the Holy Father.

For this new celebration to be marked so close to the Feast Day of Saints Joachim and Anne, the grandparents of Jesus, is a source of great joy for all of us in the Catholic Grandparents Association.

Pope Francis has a great love for grandparents and the elderly, and often talks about his own grandmother Rosa.

The CGA looks forward to being part of this new annual celebration so as the charisms of grandparents and the elderly are brought to the fore and passed on to the next generation.