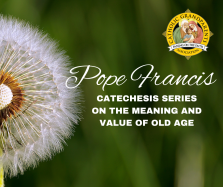 Pope Francis has begun a new catechesis series on the meaning and value of old age. The 85 year old Pontiff began the series at his weekly General Audience on 23 February by saying, “We have finished the catecheses on Saint Joseph. Today we begin a catechetical journey that seeks inspiration in the Word of God on the meaning and value of old age. Let us reflect on old age. For some decades now, this stage of life has concerned a veritable “new people”, who are the elderly. There have never been so many of us in human history. The risk of being discarded is even more frequent: never as many as now, never as much risk of being discarded as now. The elderly are often seen as ‘a burden’. In the dramatic first phase of the pandemic it was they who paid the highest price. They were already the weakest and most neglected group: we did not notice them too much when they were alive, we did not even see them die. I also found this Charter on the rights of the elderly and the duties of the community: this was edited by governments, it is not edited by the Church, it is a secular thing: it is good, it is interesting, to know that the elderly have rights. It will be good to read it.”

The CGA hopes to share each of these important pieces of catechesis with you over the coming weeks. You will find them here.