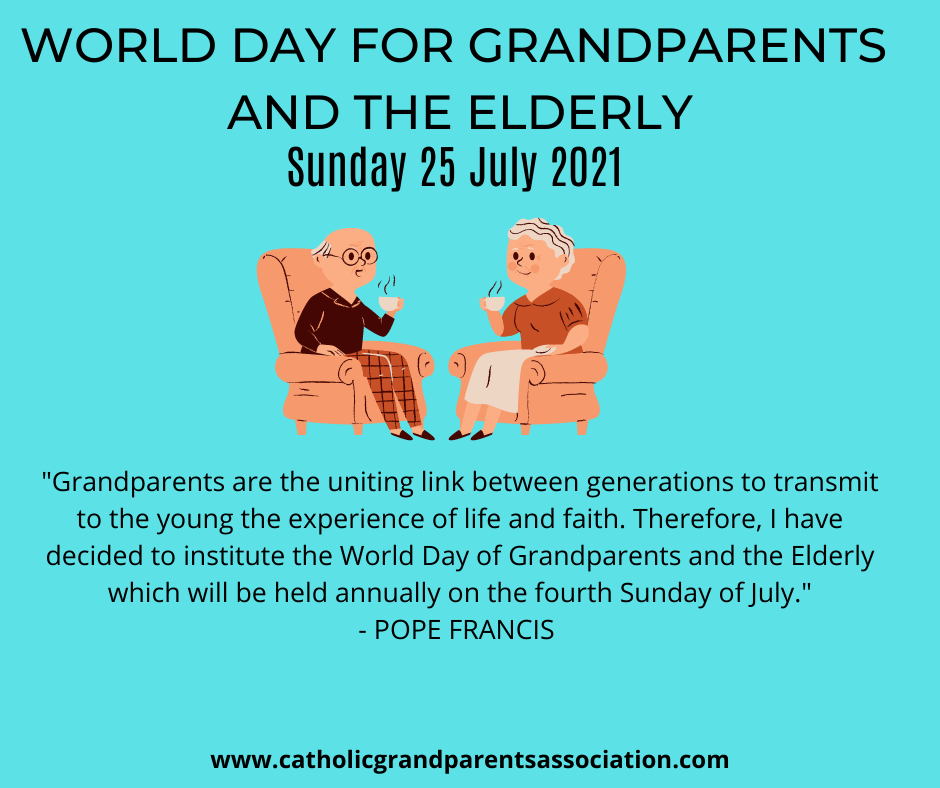 “Today’s announcement of a new Church-wide celebration for grandparents and the elderly comes in answer to our prayerful request to the Holy Father Pope Francis.” – Catherine Wiley

Catherine Wiley, the Founder of the Catholic Grandparents Association (CGA), has welcomed today’s announcement that Pope Francis has established a World Day of Prayer for Grandparents and the Elderly, which will take place for the first time on Sunday 25 July 2021.

Ms Wiley said, “We are overjoyed that our Holy Father has decided to institute a Church-wide celebration of a ‘World Day for Grandparents and the Elderly’. For this new celebration to be marked so close to the Feast Day of Saints Joachim and Anne, the grandparents of Jesus, is a source of great joy for all of us in the Catholic Grandparents Association.

“The CGA has been at the forefront in campaigning for a greater recognition of grandparents for their role and vocation in passing on their faith to the next generation. Today’s announcement of a new Church-wide celebration for grandparents and the elderly comes in answer to our prayerful request to the Holy Father Pope Francis.

“Grandparents and the elderly are often overlooked but this new day in the Universal Church calendar is a momentous achievement for grandparents and the elderly and will hopefully reassure them that they are loved and that they are needed. It is refreshing also to note the renewed commitment by the Church for the Pastoral Care of the elderly, a group of people who have suffered greatly during the Covid-19 pandemic due to being isolated from family, from their faith and from many of their daily supports.

“I firmly believe that grandparents and the elderly are needed now more than ever, not just as teachers of the faith, but as fountains of wisdom and sensibility – qualities which our world needs these days.

See www.catholicgrandparentsassociation.com for more on the work of the Catholic Grandparents Association.

In 2006 Catherine Wiley wrote to the then Pope Benedict XVI (now Pope Emeritus) to ask him to write a prayer specifically for grandparents. Pope Benedict wrote the following prayer – perhaps the first pontifical prayer of its kind in the history of the Church:

Lord Jesus, you were born of the Virgin Mary,
the daughter of Sts. Joachim and Anne.
Look with love on grandparents the world over.
Protect them! They are a source of enrichment for families,
for the Church and for all of society.
Support them! As they grow older,
may they continue to be for their families
strong pillars of Gospel faith,
guardians of noble domestic ideals,
living treasuries of sound religious traditions.
Make them teachers of wisdom and courage,
that they may pass on to future generations
the fruits of their mature human and spiritual experience.
AMEN