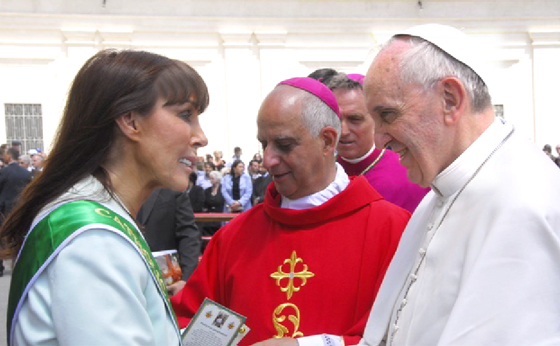 Ms Wiley was in Rome to take part in a two day Year of Faith event at the Vatican for Movements and Lay Associations in the Catholic Church.

“In his homily Pope Francis spoke about grandparents and the great love he had for his own Grandmother Rosa, who taught him his faith. In doing so he has empowered and enabled grandparents all over the world. He has also encouraged us in our mission as the Catholic Grandparents Association, which is to help Grandparents to pass on the Faith to their grandchildren and to value and support them in this important role.”

The Catholic Grandparents Association was just one of many organisations who were in Rome to take part in this two-day meeting as part of the Year of Faith. A number of individuals from these groups were selected, from around the World, to be introduced to.

The Catholic Grandparents Association had a number of meetings with Vatican officials whilst they were  in Rome and these meetings and their presentations is helping to further awareness for the special vocation of Grandparents and the vital role they have in the Church, in Society and in the Family.