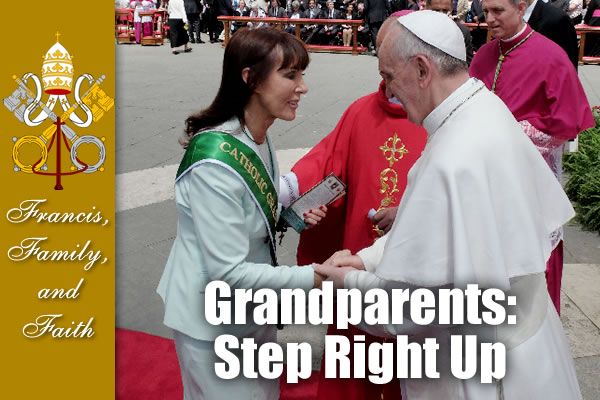 A Call Out To All Grandparents

EDITOR’S NOTE: Making holy families — that’s the focus of a series of events coming up in the life of the universal Church. Pope Francis has placed family matters at the center of his pontificate. He discussed the family with the Cardinals at a consistory in February, 2014, and he will do so again in October with many prelates at the Extraordinary Synod of Bishops. The theme of the synod is “Pastoral Challenges to the Family in the Context of Evangelization.” Then, in September 2015, the 8th World Meeting for Families will take place in Philadelphia, Pa., followed by the Ordinary Synod of bishops on the family in October 2015.

The following is one in a series of articles in which we speak with Catholic writers, teachers, evangelists, and clergy about the challenges facing families in these changing times. Here, we speak with Catherine Wiley, founder of the Catholic Grandparents Association (CGA):

What are the greatest challenges grandparents face in passing on the faith, and what advice do you have in terms of helping them to overcome these challenges?

The world and the Church passes by way of the family, so when the Church is weakened, the family is weakened, and when the family is weakened, society is weakened. We need to build up the kingdom of God on Earth. I would say no group has a more important role to play in this than grandparents. There is a real danger that we will be the generation that somehow breaks the chain of faith going back 1,600 years because we think it is up to somebody else to pass on the faith or that we take for granted that it is being done by somebody and, in fact, maybe it’s not — maybe we have got to be the ones to pass it on.

What is the goal of Catholic Grandparents Association?

The purpose is to help grandparents pass on the faith, to value and support them in that role, and to keep prayer at the heart of family life. This is not easy in this day and age. As children, my own generation was surrounded by people of faith, and that’s no longer the case these days for children. CGA organizes pilgrimages; we hold prayer appeals; we promote grandparents days in schools; and we promulgate the Universal Prayer for Grandparents, composed for us by His Holiness Emeritus Pope Benedict XVI in 2008. We hold seminars and workshops, and the Association does everything it can to raise awareness for the great vocation of grandparents.

It started more than 10 years ago in Walsingham, England, where my husband and I have a home. I knelt in prayer on Our Lady’s birthday and asked her what I, as a mother and a grandmother of 10 beautiful grandchildren, could possibly give her as a present. The answer came in the recognition that I should honor her parents, St. Anne and St. Joachim, who were the grandparents of Jesus. I realized I needed to start somewhere, and I spoke with, and enlisted the help of, a number of key people, both clergy and laity. One of these influential people was Bishop John Hine, an auxiliary bishop of the Diocese of Southwark, in England. He also has the special responsibility for Marriage and Family Life on the Bishop’s conference of England and Wales. The CGA grew out of the Grandparents pilgrimage. Basically, we concentrated on shrines of Our Lady for the pilgrimages, and the reason for that is St. John Paul II said that shrines of Our Lady were the natural place for parents and families to go to pray together, to give thanks, and to find their identity.

How many countries has the Association reached?

The CGA is now established in Ireland, United Kingdom, Australia, Germany, Malta, the Philippines, and Japan, and this year we have introduced the CGA to the United States. We now have more than 12,000 grandparents who attend the Annual National Grandparents pilgrimage in Knock, Ireland every year. There are grandparents pilgrimages celebrated at most European Shrines and many others throughout the world.

Explain the potential that grandparents have to evangelize the next generation.

Grandparents know that responsibility for the welfare of children belongs first and foremost to parents. But things nowadays are not always as straightforward as that. Economic necessity might mean that both parents have to work. Therefore, grandparents often find themselves in the role of child-minder, having to care for grandchildren during the day when parents are out at work. We also live in unprecedented times of broken and fragmented families, and grandparents tend to be a fixed point in a fast-changing and often confusing world.

Giving our young people a sure place is important as they experience the dark side of emerging adulthood: drinking and drug use, regrettable sexual experiences, civic and political disengagement, and materialism. Young people now are governed by an ethic of autonomy, of personal freedom. It’s probably still true to say that most grandparents were born and raised in a time when the ethic of commitment was still more important than the ethic of autonomy. Young people now no longer see the benefits of an ethic of commitment. Their parents’ generation rebelled in the name of freedom against older commitments, whether religious, political or familial.

As individuals and families experience the fallout of rejecting commitments, grandparents are there to pick up the pieces, and because they do still believe in an ethic of commitment, they can act as priceless witnesses to their grandchildren. Grandparents come from the age group in society that is most likely to go to Mass weekly, if not daily, most likely to vote, most likely to volunteer for church-related activities, most likely to have stuck to marriage “through thick and thin.” Grandparents build and preserve social capital like no one else.

Finally, Pope Francis has placed family matters at the center of his pontificate. Any thoughts about the Holy Father’s focus on families?

Grandparents are totally authentic with their grandchildren just like our Holy Father is totally authentic and already has a very special place of trust and love in our hearts. We know that our Holy Father recognizes the vital contribution that grandparents make to passing on the faith. He constantly refers to his own grandmother, Rosa. He has spoken about how his grandmother had a big influence on his life. “She’d tell me stories about the saints,” he said. “She left a deep spiritual imprint in me.” Rosa’s example shows that no one needs a degree in theology to pass on the basics of faith: things like saying grace at meals, or saying simple prayers with children like “Oh angel of God” or the “Hail Mary,” or familiarizing them with the famous stories of the Bible. Even if grandchildren reject faith in the future, at least they’ve become acquainted with its basic elements. They have learned how to pray. They know some of the Bible stories. They have some very basic catechism. They have been given a compass and been shown where “magnetic north” is so that if they get into trouble in the future and they want to find a sure place, they will know where to look.

Visit catholicgrandparentsassociation.org to learn more about the Catholic Grandparents Association.